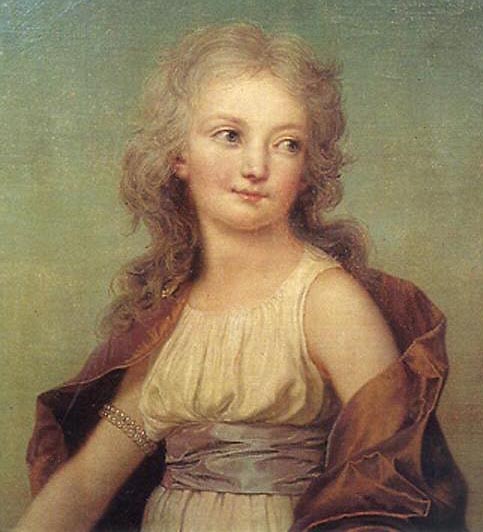 The first extract is the innocent, child-like account of their ordeal by 12 year old Marie-Thérèse, Marie Antoinette’s young daughter. This account is very sweet and typical of a 12 year old child, bewildered by the world, but secure in the love of her parents:

Throughout the 20th of June, 1791, my mother and father seemed preoccupied and distracted all day long, but I did not know why. After dinner, they sent my brother and I into one room, and they went into another room with my aunt Elisabeth, and closed the door. I have since discovered that that was when that they told my aunt that they intended escaping that very night.

At five o’clock, my mother took my brother and I, accompanied by Madame de Maillé, her lady of honour, and Madame de Soucy, our sub-governess, to Tivoli, M. Boutin’s house at the end of the Chaussée d’Antin.

While we were there, my mother took me aside, and told me not to worry, whatever happened. She told me that we would not be separated for long, and would soon meet up again.

I was confused, and I did not understand what she was talking about – she kissed me, and told me that if any of the ladies asked me why I was so flustered, I was to tell them that she had scolded me, but that we had made it up again. [A touching indication of the closeness between mother and daughter.]

At seven o’clock we came home, and I went to my room feeling very bewildered and upset because I could not understand what was happening.

I was all by myself as my mother had sent Madame de Mackau to the Convent of the Visitation, which was a place she visited quite often. She had also sent a young person who was my usual attendant, into the country.

I was hardly in bed, when my mother came into my room. She had asked me to send nearly everybody away, telling them I was feeling unwell, and to keep just one attendant with me. My mother told us that we had to leave right away, and she told us where to go and what we must do.

She then told Madame Brunier (that was the name of the woman who was with me), that she would like her to accompany us, but that if she had any misgivings about leaving her husband behind, she should stay. Without any hesitation, the woman replied immediately, that my mother was absolutely right to escape. She added that my mother had suffered for too long, and that, for her own part, she was ready to leave her husband, and follow my mother wherever she wanted to go. My mother was moved by this woman’s protestations of devotion.

The Queen then left us to go down to her own room to receive my uncle, the Comte de Provence and his wife, who had come as usual to dine with my parents. My uncle was then informed about the proposed journey.

When my uncle returned to his palace, he was attended by courtiers as he went to bed, as usual, in the ceremony of the coucher. However, when they had all left, he got up again immediately and set off with M. d’Avaray. This young gentleman shepherded my uncle through all the problems he encountered on his journey, and is still with him. [Provence had the common sense to disguise himself and to race for the border. This might have had something to do with why he escaped and his older brother, the King, failed to do so!]

My mother left to waken my brother, and Madame de Tourzel then brought him down to my mother’s bedroom. I also went to my mother’s room. One of the bodyguards was already there. It was Monsieur de Malden, and he was to accompany us on our journey.

My mother came in and out several times to see us. They dressed my brother in a little girl’s clothes. He looked beautiful, but was so sleepy, that he could not stand, and did not know what was happening. I asked him what he thought we were going to do. He answered: “I suppose we are going to act in a play, since we are all wearing these strange clothes.” [This “beautiful” child endured a harrowing solitary imprisonment.]

At half past ten, when we were all ready, my mother herself led us to the carriage, which was in the centre of one of the courtyards. This was a great risk for my mother. Madame de Tourzel, my brother and I, all got into the carriage. M. de Fersen was the coachman. [Comte Axel de Fersen was Marie Antoinette’s great love.]

In order to confuse anyone who might be following us, we drove about several streets for a while. At last we returned to the Little Carousel, which is close to the Tuileries. My brother fell fast asleep in the bottom of the carriage, under Madame de Tourzel’s petticoats.

While we were waiting, we saw M. de Lafayette go by. He had been at my father’s coucher [a ceremony in which the King was attended by courtiers and ministers who gawked on respectfully as he washed his hands etc before going to bed]. We waited there for a full hour, not knowing what was happening. Time has never passed so slowly!

Madame de Tourzel was going to be travelling under the assumed name of the Baroness de Korff. My brother and I were to be her two daughters, with the names of Amelia and Aglaë. My mother was to be Madame Rocher, our governess. My aunt was to be a female companion, called Rosalie, and my father was to be our valet-de-chambre, with the name of Durand.

At last, after waiting for an hour, I noticed a woman loitering around outside the carriage. I was afraid that someone had discovered our plan but I was relieved when our coachman [Fersen] opened the carriage door, and I discovered that the woman was my aunt. She had escaped with one of her attendants. When my aunt stepped into the carriage she trod on my brother, who was still curled up on the floor of the carriage, but he was brave enough not to call out.

My aunt told us that the palace was quiet, and that my father and mother would be with us shortly. In fact, my father arrived a few minutes later, followed by my mother, who was escorted by one of the bodyguards who was to accompany us. [It’s notable that Marie Antoinette was last to leave, shepherding her little flock, including her husband, before her.]

We then set off, and passed through the city gates without incident. A large travelling coach had been left outside Paris for us, but M. de Fersen did not know where it was, so we were obliged to wait around for a long time while M. de Fersen looked for it. My father even got out of the carriage to look for it, and this alarmed us all very much. However, at last M. de Fersen found the other coach, and we got into it. M. de Fersen said goodbye to my father, and made his escape. [The King had ordered Fersen to leave them. Was it because he would be embarrassed to arrive abroad in the company of the man rumoured to be his wife’s lover?]

The three gentlemen of the bodyguard were Messieurs de Malden, de Moustier and de Valori. M. de Valori acted as our courier, and the other two as servants, one on horseback, and the other sitting on the front of the carriage.

During the morning nothing particular happened, except that about ten leagues outside Paris, we saw a man on horseback, who seemed to be following the carriage. At Étoges, we thought we were recognised.

At four o’clock we passed through Châlons-sur-Marne, which was a large town. There we were certainly recognised. Several people thanked God for granting them the pleasure of seeing the King, and they expressed their hope that he would escape.

At the next post to Châlons, we were supposed to find some cavalry who were to escort the carriage to Montmedi, but when we arrived we found nobody. We waited around hoping to meet up with these troops until eight o’clock. [The cavalry had left because the party was so late, they thought the plan had been abandoned – just as it had been abandoned, several times before.]

At the close of day we passed through Clermont. We did find troops there but the villagers were so agitated that they would not allow the cavalry to march. An officer recognised my father, and came up close to the carriage, telling the King under his breath, that he was betrayed. We also saw M. de Charles Damas, but he was unable to do anything for us. [The villagers thought the soldiers had come to arrest them for non-payment of taxes, so they had surrounded the soldiers in huge numbers and paid no attention to the King’s carriage.]

However, we continued our journey. Night had fallen and, despite our anxiety, everyone in the carriage fell asleep. But suddenly we were wakened by a dreadful jolt, and at the same time a bodyguard came to the carriage door to tell us that they did not know what had happened to the courier who had been sent on ahead of us. Just imagine how terrified we were. We thought they had discovered our true identities and were about to arrest us.

We had now arrived at the village of Varennes, which has just about a hundred houses. Varennes has no regular post-house, and travellers usually have to arrange to have horses sent from the next post-house, in advance. They had taken this precaution for us, but the horses had unfortunately been left near the castle, which was on the other side of the river, and at the other end of the village. Unfortunately, none of our escorts knew where to find them. [The King had thoughtlessly left behind the only other man who knew the route – as well as Fersen.]

Finally, our courier came back, accompanied by a man whom he believed to be in the secret, but who was, I suppose, one of Lafayette’s spies. He came to the carriage door in a night cap and bed gown. He almost threw himself into the carriage, and told us that he had a great secret, but he refused to tell us what it was.

Madame de Tourzel asked him if he knew of a Madame de Korff. He answered: “No!” And a moment later, he disappeared.

After a great deal of trouble, the postilions were eventually persuaded that the horses were waiting at the castle, and they slowly proceeded in that direction.

We continued further into the village, but then we heard alarming shouts of: “Stop! Stop!” The postilions were seized, and in a moment the carriage was surrounded by a great crowd, some brandishing arms, and some holding up lanterns.

We left the carriage, and, as we crossed the street, six mounted dragoons passed us, but unfortunately they had no officer with them. If an officer had been present, six resolute men would have intimidated the mob, and might have saved the King.

When her father was deposed in August 1793, a year later, Marie-Thérèse was imprisoned with the rest of her family, and was a painful witness to the removal of each member of her family – until she was left in solitary imprisonment. She was finally released from her traumatic imprisonment on her 17th birthday, the only surviving member of the royal family, and bore the scars of her ordeal for the rest of her life.