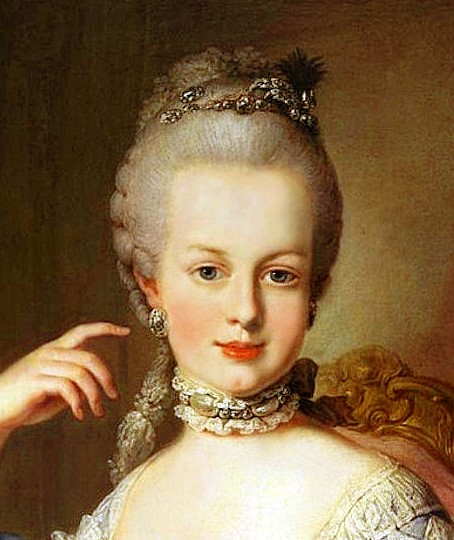 (MAY) Marriage at Versailles of 14-year-old Marie Antoinette and 15-year-old Crown Prince.

(JANUARY) Marie Antoinette tells Ambassador Mercy that “fears her husband’s apathy.” [Quotes from author’s translation of secret correspondence between Marie Antoinette, her mother Empress Maria Theresa and Mercy, between 1770 and 1780.]

(JANUARY) Fersen has long conversation with Marie Antoinette at Opera Ball. Noticed by courtiers – Marie Antoinette has fallen in love! Leads to gossip at vindictive court of Versailles, as a result.

(MAY) Louis XV dies. Fersen leaves France, after Swedish Ambassador tells him to do the honorable thing – as people are still gossiping about the way Marie Antoinette seemed smitten with him.

(MAY) Malesherbes resigns from ministry because of Queen’s animosity. “Public aware and annoyed.” “Queen bored.” Brother-in-law, d’Artois has son – heir to the throne. (This child would later marry Marie-Thérèse, Marie Antoinette’s daughter.) Queen upset at her childlessness.

(OCTOBER) Maria Theresa writes to Mercy – “I pity my daughter.”

(APRIL) Despairing Empress Maria Theresa sends son, Emperor Joseph to France to persuade procrastinating Louis to have remedial operation to remove too tight foreskin, which is preventing him ejaculating, and thus cannot impregnate Marie Antoinette. Operation successful. Previously King had said only tried to have intercourse from duty – probably was painful. After operation tells aunt: “Pleasure is wonderful. Wish I’d had the operation years ago!” WHY DIDN’T HE?

(JUNE) Widower Joseph, who usually liked scolding Marie Antoinette, writes to his brother: “Queen truly honorable and virtuous, and living a respectable life.”  Gives the lie to those who claim Marie Antoinette had taken a lover by this time. Also: “With my sister I found a sweetness of life which I had renounced, but for which I see I still retain a liking.” Maria Theresa writes to Marie Antoinette – “Hopes of pregnancy at last. Angers me, because having children means everything to you.”

(AUGUST) “Queen’s debts not being paid…No money for charity…Public annoyed.”

(SEPTEMBER) Mercy writes to Maria Theresa: “I found the Queen overcome with joy at the thought of being pregnant.” (She miscarried.)

(SPRING) Queen finally pregnant again. “I feel it’s just a dream. But the dream has not ended.”

French army sent to America to support Americans. Fersen participates in American War of Independence then over next few years travels with King of Sweden but returns periodically to France.

(FEBRUARY) King and Queen to Paris after Marie-Thérèse born. Reception by Parisians is cool.

(JULY) Second Princess born to Marie Antoinette.  Dies before one-year-old. When thoughtless courtier asks Queen why so upset, as only baby, Queen replies: “Because she would have been my friend.”

Fersen returns to France and does not leave again until June 1791, when escorts royal family out of Paris in unsuccessful bid to escape from domination by National Assembly.

(MAY) Opening of Assembly composed of deputies elected from all over France, in response to bankruptcy of country and need for more taxes. Ordinary people exhilarated because now have voice. Whole country in ferment. Believe future will be brighter. Believe crippling taxes will be lowered.

(JUNE) Death of Queen’s older son – similar symptoms to those eventually developed by younger son. Many aristocrats emigrate because focus of people’s resentment, due to cruel feudal duties imposed by aristocrats upon peasants living on their estates, and aristocrats’ exemption from taxes.

(JULY) Bastille taken by people in popular uprising. Paris now in hands of people. People form own army – National Guard – to protect themselves from King’s army. Lafayette elected Commander of National Guard in Paris. King’s brother d’Artois leaves France because of threats against his person. Queen similarly threatened but refuses to leave. Assembly supposed to be temporary gathering, but challenges King’s authority, and refuses to disperse back to their homes. King surrounds them with his army, but army mutinies and refuses to obey orders. King withdraws army from Assembly. People triumphant. Assembly now declares itself permanent and calls itself National Assembly.

(OCTOBER) At Versailles, attempt on Queen’s life by mob from Paris, demanding bread. Her Bodyguards killed. King agrees to leave Versailles, with mob, travelling behind heads of Bodyguards on pikes, and goes to live in Paris in Tuileries Palace. Fersen in one of carriages behind Queen.

(FEBRUARY) King goes to National Assembly and swears support for Constitution being developed by deputies, to enshrine rights of man [women had no rights]. Enthusiastically received by deputies.

(OCTOBER) King contacts General Bouillé to ask him to begin to plan escape from Paris of royal family, with Fersen. Planned for following Spring.

(NOVEMBER) Lafayette tells Queen is looking for evidence of her adultery, in order to persuade King to divorce her.

(JUNE) Royals escape almost as far as border region of France, commanded by Bouillé. Arrested near border. Fersen and King’s brother, Provence, both escape, as took other routes and travelled swiftly.

(AUGUST) Queen writes poignant letter to Mercy telling him of how King constantly changes his mind – and “that is why so much is never even attempted.”

(SEPTEMBER) King swears in National Assembly, in front of deputies, to uphold Constitution which deputies had just completed. People joyful, think Revolution over and peace and prosperity for future. King returns to palace and cries with Queen. Later that night sends courier to Vienna, asking for intervention of foreign powers. Count of La Marck to Mercy – “King incapable of reigning.” Thousands of aristocrats fleeing France to join Princes and émigrés, hoping to return to France at head of foreign army and return France to an absolute monarchy where ordinary people had no rights.

(FEBRUARY) Fersen – most wanted man in France – returns to Paris and sees Queen for last time. Risks hideous death for this last visit. Tries to persuade royals to leave with him – they refuse.

(JULY) Brunswick Manifesto – threatens destruction of Paris by Austrians, if they do not submit to the King. Infuriates people. King vetoing measures to defend France from approaching foreign armies.

(SEPTEMBER) Massacre of prisoners in jails: 6 – 12,000 suspected royalists or sympathizers in Paris. No one knows exactly how many killed. Massacres all over France. The Reign of Terror has begun.

(JULY) Prince removed from Marie Antoinette, despite her cries and entreaties.

(AUGUST) At 2am, Marie Antoinette removed to Conciergerie Prison.

(JUNE) Marie Antoinette’s son dies after 1 and a half years of solitary confinement. Imprisonment of Marie-Thérèse now made slightly less harsh in response to death of her brother.

(DECEMBER) Marie-Thérèse released from prison. Goes to Austria to Emperor but leaves because he pesters her to marry one of Austrian Princes. Leaves to join her uncle Provence – now Louis XVIII. Marries French cousin, son of uncle d’Artois. Marie Antoinette wanted them to marry so that could keep Marie-Thérèse near her. Marie-Thérèse fulfilling last wishes of her mother. Is childless. Leads blameless life doing good works.

FROM AUGUST 1792 – Austrians and Prussians invade France, on Louis’ invitation. Leads to European war for many years, in which millions of Europeans suffered and died. Rise of Napoleon etc.